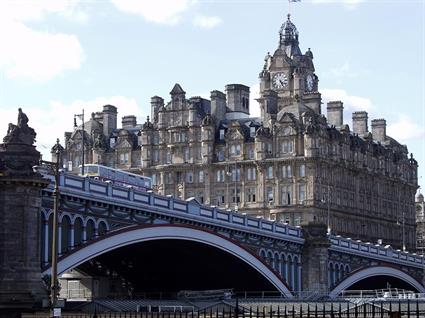 Edinburgh has some of the most beautiful old buildings in Scotland, such as the Balmoral Hotel, the Dome and Edinburgh Festival Theatre.

It is also notable for its redeveloped buildings, including the Bonds in Leith which were formerly bonded warehouses. And Edinburgh is not just about old buildings – there are a number of new commercial properties, especially in the business district, which, with their contemporary lines, fit effortlessly into the cityscape.

With its central location on Princes Street and adjacent to Waverley Station, The Balmoral Hotel is a famous Edinburgh landmark. It was opened as the North British Hotel in 1902, a traditional and elegant Victorian railway hotel with a clocktower and Scottish baronial influences. It was designed by William Hamilton Beattie, architect of Jenners department store. At the time it was considered a vast hotel, with 300 bedrooms and a huge banqueting hall, ballroom and drawing room. In the 1980s, after a period of decline, it was refurbished and renamed, and today it is a five star luxury spa hotel.

The Dome is an A-listed building which was built in 1847 as the Commercial Bank of Scotland’s headquarters. It was designed by David Rhind in the neoclassical style which he was well known for. Notable elements include the arched upper windows, Corinthian portico and wreathed cast iron side gates. Inside, there is a square hall containing Ionic columns and sweeping staircases with gilded handrails. The hall beyond is a magnificent space with arched ceilings, central dome, marbled columns and mosaic floors. The Dome is now a bar, restaurant and nightclub, after being closed by the Royal Bank of Scotland in 1993.

Located by the waterfront in Leith, Bonnington Bond was originally a bonded warehouse. After falling into disuse, it was redeveloped and converted in the 1990s into stylish open-plan office spaces. The property features comfort cooling, underfloor trunking, passenger lifts, shower facilities, secure basement storage and CCTV monitoring. There is also generous car parking provision and an attractive reception area. Bonnington Bond forms just part of the Leith area regeneration, along with several other conversions and new builds into commercial and residential spaces. Current occupiers of The Bonds development include Toshiba and Orchard & Shipman.

Designed by the famous theatre architect Frank Matcham, the Empire Palace Theatre opened in 1892. The interior, in common with theatres of the time, was lavishly decorated, and it was refurbished in the 1920s to allow for more spectacular shows. Up until 1963 it was in popular use as a festival and ballet theatre, but it then became a bingo hall. Once again it was remodelled and opened in 1994 with new foyers, a single open stair, a new stage and backstage structures, and its distinctive new glass frontage.

Exchange Place 1 has been hailed as the most significant office development in the city. It has a prime central location in Edinburgh’s business district and offers Grade A office accommodation, with current occupiers including Hymans Robertson, Scott Moncrieff and Wood Mackenzie. The distinctive building, with its stylish sandstone and glass exterior, is located on a prominent corner, with office suites set back behind a large public area. Features include a double height entrance, passenger lifts and a metal suspended ceiling with recessed lighting.