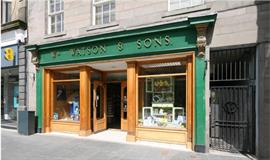 Description The premises comprise extensive retail and storage accommodation mainly on the ground floor. The main retail space extends back from the High Street and wraps around an external courtyard area. Within the main retail area is a useful mezzanine level and beyond, staff offices and rear storage areas with access from Mill Street. There is an additional storage building located within the rear car park and yard area and further staff/storage areas located at first and second floor levels within the main building.
The premises lend themselves to redevelopment either in whole or in part whereby the front retail area is retained and the rear storage areas are redeveloped for an alternative use. We are of the opinion that a retail warehouse or leisure use would be most suitable, however other alternatives uses may be considered subject to obtaining the necessary planning consents.
There are three two bedroom flats located above the shop and facing onto the High Street. Access to the flats is via a gate (see photo on front page) and pend to the east side of the shop frontage. The flats are leased on short assured tenancies and available to purchase by separate negotiation.


Services The premises benefit from mains electricity, water and drainage.
EPC Rating Band F.
Rates We have inspected the Scottish Assessors Agency website and confirm that the premises are entered in the Valuation Roll having a Rateable Value of £87,400. The current rate poundage for 2013/14 is £0.471.
Legal Costs Each party will be responsible for their own legal costs incurred in this transaction with the buyer/tenant being responsible for Stamp Duty Land Tax, Registration Dues and VAT incurred thereon.
Terms Purchase or rental offers are invited.

Perth was recently awarded City Status and has one of the fastest growing populations in Scotland. It is a place where hugely successful international companies such as Scottish and Southern Energy, Stagecoach and Aviva sit side by side with dynamic small businesses and sole-traders. Perth is strategically located at the heart of Scotland's transport network and is within 90 minutes drive time of 90% of Scotland's Population.
The premises are situated in a prime location on the north side of the pedestrianised section of Perth High Street directly opposite the main entrance to the St John's Shopping Centre. The premises are one of only a few large retail units on the High Street which extend back to Mill Street. The rear entrance is also highly prominent being adjacent to the public walkway from Perth's largest multi-storey car park and Pullar House (Perth and Kinross Council HQ offices).
Nearby High Street occupiers include; Boots, Primark, EE, Gap, Sports Direct, Costa, Monsoon, Vodafone and Debenhams. To the rear neighbouring occupiers include Perth and Kinross Council, The Bothy Restaurant, 550 space multi storey car park, Perth Theatre, Perth Concert Hall and the soon to be completed Premier Inn with 83 bedrooms and restaurant.

The pricing is unfortunately not available for this property online. Please submit your details using the form below and the agent will contact you to discuss this further.

Request more information about this property
↑ Back to top

This property is marketed by