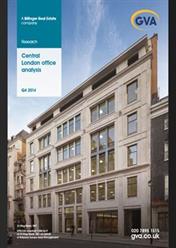 Leading property consultants, GVA, reveal that 2014 has been the most active year since 2011 for central London's office propety market and that almost a third of take-up has been driven by pre-letting.

Although 2015 is looking to be more sedate for development completion, 40 per-cent of the construction is already let, suggesting that demand for available space will far outweigh supply in the coming year. Indeed, West End submarkets are expected to surpass the 2007 peak and the central markets are expected to benefit from supply constraints, with headline rental growth sure to follow, as well as substantial potential for incentives.

With 2014 exhibiting a healthy, balanced market of finance, banking and professional services, the strength of Q4 brought in a 15 per-cent increase for total take-up in the central London occupier market, with TMT responsible for 25 per-cent of activity in this period. Availability increased across central London, due in part to several sizable completions, yet the pre-letting of incomplete space leaves only 7 million sq ft of underway construction still available. With a prime rental increase of 7.7 percent, the GVA central London index is now more than 10 per-cent above the Q4 peak of 2007.

The central London investment market, in comparison, is looking at a relatively quiet first quarter in 2015 as the frenetic pace of 2014 leaves little remaining quality product. In Q4, investment topped £6 billion – the fourth highest quarter recorded – which was 50 per-cent above the value of Q3. With an 86 per-cent increase on the five-year quarterly average, overseas investment purchases reached £12.2 billion, accounting for 73 per-cent of the year’s investment. Indeed, demand from overseas combined with product quality is predicted to see record prices and yields in 2015.

Take-up across the West End occupier market during Q4 was the busiest since 2013’s Q1, seeing a 26 per-cent increase on the five-year quarterly average. With availability stabilising across the quarter at 3 million sq ft, and a vacancy rate of less than 4 per-cent, prime rents grew by 1.5 per-cent, only 0.2 per-cent less than growth in the City and 0.1 per-cent less than Central London. Construction completion is set to add just under 4 million sq ft by the end of 2015, although pre-letting has already reduced availability by 59 per-cent to 7 million sq ft.

The Docklands occupier market saw a 45 per-cent increase on the five-year quarterly average during Q4, with take-up double that of Q3, and the second busiest since 2010. With finance and banking accounting for 83 per-cent of activity during this period, the vacancy rate dropped 0.6 per-cent on the previous year’s measurement. On site development is all residential led, with no office space currently under construction. With a wide disparity in rent required by landlords and occupier sub-lets, the latter have seen significant, yet stable, discounts offered and rent-free periods at 24 months.

Take-up in the City occupier market in Q4 was the lowest of the year, although activity was still 6 per-cent higher than the five-year quarterly average. With 4.5 million sq ft of new-development construction completed during the quarter, over half of which was pre-let, by the end of Q4 there was availability of 2.2 million sq ft. Core rents remained stable, albeit at the highest level since 2008, with rent free periods following this trend at 21 months. Nevertheless, as availability continues to be impacted by pre-letting, it is thought that 2015 will see a surge in rental growth as constraints increase. This will effectively shift the power dynamic to landlords, paving the way for potentially substantial incentivisation.