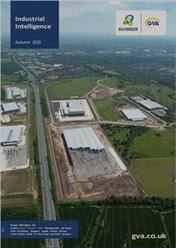 According to the GVA/Bilfinger autumn report, the take-up of modern distribution units in the industrial sector in the first half of 2015 has been in line with pre-recessionary figures, offering the highest level since 2010. This has instigated an accelerated take-up of second hand spaces as supplies diminish. Indeed, exceptional investor demand for UK distribution property has been driven by both domestic and overseas interest, with transactions in 2015 expected to outperform other core sectors, continuing the 2014 trend that saw an 85 per-cent above five-year-average. Retailer response to expanding omni-channel and digital media, as well as e-commerce, is continuing to generate growth. Forecasts suggest at least a 13 per-cent return by the end of 2015, driven by a combination of average UK rental growth and yield compression.

Strong demand coupled by a falling availability of good quality stock has had a significant impact on headline rents and incentives. Of the locations monitored, the South East has shown the strongest growth, but net effective rents in key UK locations have, as a whole, seen an 11 per-cent average increase. The prime supply shortage has influenced an increased interest in secondary stock, and there are pockets of unsatisfied requirements becoming visible in various parts of the UK. This diminishing supply of prime stock has seen a rapid growth in speculative development, with schemes with schemes that are already under construction, or with imminent start dates, now amounting to more than 5 million square feet.

As speculative construction in the first two quarters of 2015 is roughly one quarter of 2014’s annual take-up over 100,000 square feet, building is firmly targeted in prime locations where supply is scarce. This increased level of activity has effected land values with those areas monitored showing a rise of 17 per-cent in land values in the first quarter, with the South East again showing the strongest growth.

The active pursuit of prime location opportunities by a number of funds and their deliberate alignment with leading developers is due to the acquisition potential and profit share, with incentives offered to developers to encourage quick letting. This improved finance availability, as well as declining interest margins and increased loan-to-cost ratios, has seen a marked rise in low base construction orders.