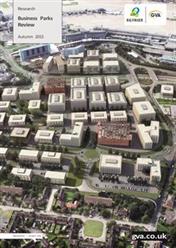 The latest Business Parks Review from GVA/Bilfinger has calculated that, in the first two quarters of 2015, a total of 2.3 million square feet of take-up was recorded. This was a 6 per-cent increase on the half year average of 2.2 million documented over the five year calculation period. Of this take-up, Yorkshire, Humberside and the North East showed the highest performance, with average levels documented as over 470,000 square feet for the first two quarters of 2015, which is the highest recorded take-up since June 2009.

With increased demands and a stock increase of less than 789,000 square feet, vacancy rates also fell in the first two quarters, from 16.2 per-cent in December 2014 to 15.8 per-cent by June 2015. This is in comparison to the peak rate of 19.3 per-cent documented by the end of 2012, and the low rate of 12.4 per-cent by 2007’s year end. It is important to note that the vacancy rates have not fallen uniformly across the regions, with the Midlands, Scotland, the North West and North East seeing decreases, whilst Wales and the South West remained static. The South East and East saw a minor availability increase yet Scotland, despite showing a stock increase, saw availability drop to 33 per-cent. Rental performance rebounded with the strongest rate since 2000, inspiring predictions for a 14 per-cent return over 2015 as a whole, to be followed in 2016 by an 8 per-cent return driven by rental growth, rather than yield movement.