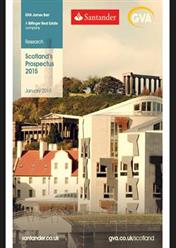 Summarising the nation's overall performance as detailed in the recently launched 'Scotland's Prospectus 2015', Keith Aitken, Regional Senior Director of GVA James Barr, said: “2014 was a truly significant year for Scotland. In 2015, the economic building blocks are in place that will generate further growth in real estate across all sectors in our key regional cities.”

In addition to its undoubted significance, the year 2014 – influenced by factors such as the Independence vote – also proved to be something of a roller coaster for Scotland in terms of investment and trading volumes, and actually finished up by returning the best figures since the 2006 market peak.

For 2015 and beyond, Scotland will be looking to kick on from its above-average economic growth – estimated at around 2.8% in 2014 – with continuing medium-term expansion predicted in the finance and insurance sector, plus growth in professional services which is expected to be reflected in occupier demand in the office sector. Forecasts suggest major growth opportunities over this year will be focused on Glasgow, Edinburgh and Aberdeen. Recent falling oil prices have introduced a degree of uncertainty, especially for Aberdeen, with contrasting effects for consumers and producers. Even so, the overall outcome is expected to reinforce economic growth.

Led by activity in Aberdeen, the Scottish land and development sector saw significant improvement in 2014. This included new funding sources and some inevitable rebalancing of the commercial property market with some newly emerging business sectors and also some withdrawals. Food retail is undergoing rationalisation, whilst the private rented sector continues to grow and attract developers.

Edinburgh's technology, media and telecoms sector is strong, and Glasgow is likewise seeing new entrants. In 2015, increased demand is forecast for Edinburgh, and Glasgow's new City deal will boost major projects with the Buchanan Galleries extension adding to its appeal as a prominent UK retail hub. However, Aberdeen's considerable momentum is expected to slacken, and general pre-General Election uncertainty may somewhat limit speculative development.

The 2014 investment market showed a broad spectrum of investors and this pattern is set to continue in 2015 with UK funding remaining strong, plus the likelihood of increased investment from overseas institutions. Gross capital formation has fared well in Scotland and, despite the oil-price drop and euro zone fragility, a strong demand to invest is predicted.

Commenting on this national assessment, Nick Peet, Santander's Divisional Head, Real Estate Finance for Scotland, said: “In 2014, Santander’s team of Real Estate specialists were able to play their part supporting a significant number of important transactions across Scotland. In 2015 we very much see further growth opportunities and are committed to continue supporting the ambitions of our Real Estate clients.”

Office take-up in Edinburgh, Glasgow and Aberdeen significantly exceeded the five year average in 2014, with Scottish Markets mirroring the upward trends south of the Border. The upturn was more pronounced in Glasgow, with Edinburgh resilient and Aberdeen continuing to positively exploit its position as the Energy Capital of Europe. Looking on further into 2015, Glasgow is anticipated to show further activity in the renewables sector, whilst Edinburgh should see increased demand for out-of-town locations, and Aberdeen is expecting corporate acquisitions to herald the entry of new overseas businesses to the market.

An overview of the impact on the property market of the National Planning Framework and Scottish Planning Policy (2014) shows that, buoyed by the document's new presumption in favour of projects contributing to sustainable development, an increasing number of new clients are prepared to mount robust campaigns in favour of proposed developments, and developers generally are in an optimistic mood about the prospects for 2015 and beyond.