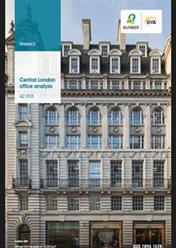 A recent report conducted by leading property consultants, GVA, reveals that there has been a substantial change in the rental profiles across central London, with a general fall in availability and increased strength in rental growth.

The analysis on the central London office market showed that high rents are continuing to be achieved, with an increasing number of deals occurring at £150 per sq. ft. in core West End markets. Regardless of minimal movement on ‘normal’ prime rents, the City saw rents in excess of £90 per sq. ft. on tower floors at The Leadenhall building.

Rental growth continues to be strong in markets previously considered fringe like Chelsea, which has seen an increase of over 30% in prime rents during the last year. Shoreditch and Clerkenwell have had similar levels of rental growth, with prime rates at £60 per sq. ft.

Pre-let space during the active years of 2013 and 2014 accounted for a third of the 23 million sq. ft. transacted. However, the first half of 2015 saw levels similar to 2012, with just 830,000 sq. ft. let on a pre-let basis, meaning that it represented only 17% of total takeup. Despite this, there is the expectancy that many large occupiers will need to pre-let as availability continues to sharply decline.

Q2 2015 take-up in central London was in line with Q4 2014 at 2.9 million sq. ft., up 43% from Q1 and up on the five-year quarterly average by 18%. Activity during this quarter was mainly in the West End fringe and the City core, however Canary Wharf’s take-up increased 152% on its five-year quarterly average. Majority of the take-up consisted of second-hand Grade A space at 45% of activity, while second-hand Grade B space accounted for 16%.