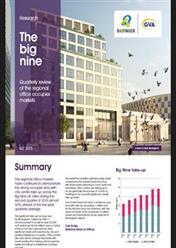 A recent report by leading property consultants, GVA, reveals that continuing their demonstration of weighty occupier visibility, the second quarter’s city centre take up across the 'Big Nine' has shown a near 50 per-cent advance on the five year quarterly average.

After a “comparatively modest start”, the regional offices have seen the take up figures reach the highest point since the economic downturn a few years ago. On average, headline net effective rents have risen by an average of 11 per-cent over the year leading to Q2, whilst rent free periods have fallen by nearly 10 months.

Encouraged in part by HSBC’s declaration that a new HQ will be located in Miller’s Arena Central, as well as reports of significant operational increases planned by both existing occupiers as well as new transplants, Birmingham has led the way in Quarter 2. Calculations have the take up as three times the quarterly average, breaking records with 650,000 square feet, and a predicted year end of 1,000,000 square feet. This includes a 35,000 square foot Hagley Road letting to Extra Energy, as well as a 46,000 letting to the City University at Eastside Docks. Speculative development has also seen the commencement of infrastructure works at the Argent’s Paradise site which, upon completion, will see a collective 310,000 square feet of office buildings. Due to complete in 2018, these works will be preceded by a major 153,000 square foot refurbishment in 2017 and an ambitious 110,000 square foot refurbishment project in Cornwell Street in 2016.

Leeds has followed Birmingham’s success closely, with impressive lettings made to Price Waterhouse Cooper and Addleshaw Goddard, of 49,600 square feet and 51,500 square feet respectively, whilst Manchester has in turn offered attractive opportunities to Freshfields and Ford Credit, covering 42,000 square feet and 45,000 square feet respectively, as well as declaring a large volume take up of 10,000-and-under square feet of lettings. The broad range of sectors attracted to King Street as well as schemes on the fringes have demonstrated “unprecedented levels of demand” in response to the relatively low rents and “dramatically improved environment” on offer.

Above average take up in Edinburgh, particularly in pre-let marketing, has been instigated by the increasing sparsity of larger floorplates with “speculative schemes under construction” subsequently gaining additional interest. Exacerbating this lack is the conversion of former office spaces to different uses, prompting activities to be undertaken in peripheral locations, with West Edinburgh business parks counting four requirements of up to 50,000 square feet. Elsewhere in Scotland, despite a below average take up, Glasgow’s demand for Grade A offerings is “at its highest since pre-recessionary times,” totalling over 300,000 square feet, as the historic occupier-friendly market weighting shifts to the landlords.

Occupier confidence in Manchester has continued to abound, although Bristol’s 2014 record take up has not seen a repeat in 2015’s Q2. Instead, a number of Grade B deals concerning square footage up to 12,000 have taken the activity above the quarterly average, despite the absence of the large requirements necessary for the generation of the next development phase. Instead, the schemes likely to show response are CEG’s Aspire site, where demolition has begun, and Cubex’s submission of plans for 95,000 square feet. Finally, Cardiff city centre has enjoyed a “significant increase” in occupier activity, with take up reaching over 100,000 square feet in three out of the past four quarters, boosted by a Six Park Street deal for 40,000 square feet, which took the city centre take up to 112,000 square feet, 30 per-cent over the quarterly average, as well as GVA’s 15,700 square foot acquisition at Capital Tower.