Olympicopolis – the changing legacy of the 2012 games 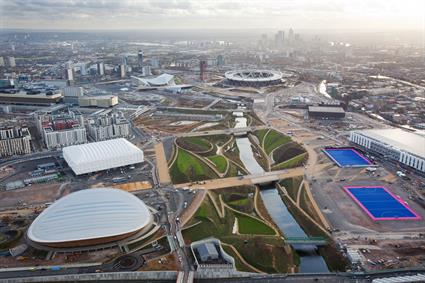 With its original housing quota almost halved, some observers have complained that the bold regeneration plan for London's East End – Ken Livingstone's dream of an Olympic legacy transforming the area into 'a model for 21st-century living' – has shifted its emphasis from community-led objectives to property-led imperatives.

Mayor of London Boris Johnson's response has been to announce his own ambitious vision for the Queen Elizabeth Olympic Park and its environs – bearing the tabloid-friendly title 'Olympicopolis' – which promises to create a new cultural hub and new jobs, in addition to fresh housing.

Back in the Livingstone era of 2004, the London Development Agency proposed a scheme for 10,000 homes in the Olympic park, predominantly high-rise developments with one/two-bedroom flats.

Overall responsibility for legacy planning was initially delegated to the Olympic Park Legacy Company (OPLC) which, in 2010, submitted a comprehensive draft outlining development through to 2031.

Under OPLC proposals, the housing blend was described as low-rise family homes plus apartments, with total units reduced to 8,000. Further outline plans approved in the summer of 2012 detailed the creation of five fresh neighbourhoods, whilst dropping the housing total again to 6,800, with 35% affordable housing, and 130,000 square metres 'employment space'.

A further stipulation that 42% should be three-bedroom units or more echoed OPLC's earlier pronouncement that family homes should constitute 'the centre of the plan'. Though the housing profile was being defined with increasing clarity, fresh developments continued to diminish the total provision.

By autumn 2012, the London Legacy Development Corporation (LLDC) had assumed responsibility for the progression of park plans and Stratford's wider regeneration. Thus, when it emerged the expansion promised in Boris Johnson's Olympicopolis announcement would probably mean another decrease in the park's housing, it fell to LLDC's chief executive Dennis Hone to spell out the consequences.

Quoting LLDC's 'worst case analysis', Hone said housing would drop by another 1,000, but added that Olympicopolis' 'transformational impact across the East End' would trigger 'house-building all over the place'. Hone insisted housing initiatives were on track, citing Chobham Manor – the first new district with planning approval – where 70% of housing was at least three-bedroom, and, 'subject to financial viability', affordable housing remained a commitment.

And on perceived shifts in the legacy masterplan, excepting the new cultural-hub initiative, Hone saw no deviation beyond the need to preserve local character, saying: 'Building 25-storey, one-bedroom apartment towers is the last thing we want to do across the surrounding areas.'

Clearly, Olympicopolis is about more than refocusing a community housing project. The vision calls for a two-phase competition to locate and appoint a high-calibre international design team to transform Stratford's Queen Elizabeth Olympic Park, creating a new 21st-century cultural and educational hub.

The mayor's ambition is to attract world-class companies and institutions to a location promoting collaboration and innovation, where knowledge-based corporations, for example, could easily connect with existing tech clusters at Here East and Tech City.

On completion, these plans are confidently predicted to add £5.2 billion to the local economy, create 10,000 new jobs, and generate extra tax revenues of £99 million per annum.

Commenting on scheme's impact and aspirations, Boris Johnson said: '...London's Olympic and Paralympic legacy is helping to transform Stratford into a vibrant new metropolitan centre. Our goal is to create thousands of new jobs whilst driving up the life chances and opportunities of local people to match those enjoyed across the capital.'

According to Vivienne Ramsey, retired LLDC director of planning, the vision can be seen as a mayoral response to lobbying from host boroughs anxious to inject a South-Bank style 'wow factor'.

Confirmed Olympicopolis participants include Sadler's Wells, University College London, and the Victoria and Albert Museum, with rumours that Washington's Smithsonian Institution is also poised to come aboard. Elsewhere, it has been revealed the Financial Conduct Authority and Transport for London are also scheduled to transfer to the park.

Also announcing a revamp of transport links to accommodate the anticipated shifting of London's centre of gravity, Boris Johnson said: '... we will be moving Stratford's stations – and one of the largest and most connected transport hubs in the country – into a new zone. This is an additional measure to support the ambitious regeneration plans we have in place.'

Enthusiastically welcoming the 'rezoning', Newham's mayor, Sir Robin Wales, said: 'This provides long overdue recognition that London is moving East and there is much more to do. Rezoning East London will accelerate growth, bring additional investment and visitors and create much needed jobs and homes.’

Summarising one local view, University of East London professor Ralph Ward observed: 'The legacy is now moving in a much more interesting direction which is cultural and employment-led. Trying to turn the park into Bloomsbury always struck me as cute and fanciful. This is a vibrant, urban place, not a suburban place.'