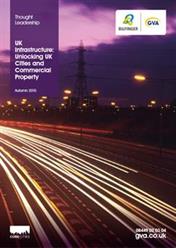 The latest report from Bilfinger/GVA succinctly highlights the need to involve our cities in the decisions made on infrastructure requirements, funding sources and delivery practicalities.

The intention behind this approach is threefold: help to rebalance the economy, solve the productivity puzzle and, in doing so, create thousands of jobs.

Through the devolution of infrastructure spending and the implementation of effective financing mechanisms, it is calculated that an additional £66 billion could be added to the economy, significantly reducing the productivity gap between our cities.

A classic example of infrastructural potential is transport. Congested road networks and slow rail connections mean that the commuting between North of England cities is the exception, rather than the rule. Leeds and Manchester are only 44 miles apart, yet less than 0.2-per-cent of commuters travel between the two. And the digital infrastructure has also been neglected, leaving us to trail behind competing cities from across the globe in both areas.

The proud track record of partnership across the private sector suggests that the potential for improvement is certainly there, and by implementing innovative funding – such as tax incremental finance, local authority bonds and business rate growth retention – local knowledge and expertise can be utilised for the improvement of both the soft and hard infrastructure that our country so desperately needs.

In order to meet the full economic potential in a balanced and sustainable manner that benefits all regions, the country requires an infrastructure that can absorb the increased demand. But the implementation of such a structure faces three challenges:

1) The difficulties inherent in improving delivery, particularly for projects outside of London and the South East region. Due to finite public investment, hard choices are inevitable and the economic case is often the major determining consideration.

2) The combination of political interference, no clarity of long term vision, a lack of devolved power and limited local financial options, all of which prevent cities and regions from determining their own infrastructure choices.

3) The difficulty of balancing competing investment needs, which does not currently take into consideration the economic contribution or potential of the core cities in question.

Nevertheless, should the appropriate actions be taken to overcome these hurdles, it is estimated that the combination of additional local financial controls and freedom to invest could add one million jobs to English regional cities by 2030, with a potential £222 billion positive economic impact and major implications for commercial property standings.

Through the implementation of the infrastructure proposals, the next decade will see development sites unlocked, employment growth potential increased, and the potential amount of investment in the commercial property sector raised exponentially.

Indeed, an excellent example of the impact of appropriate transport infrastructure is in Central London, where the four office sub-markets with the highest stock increases have all been situated near those railway stations with the highest level of improvement.

With the trend of station-centric development likely to be replicated in the core cities, and with such schemes already gaining traction in various locations, it is clear that renewed investor confidence in the regional commercial property market is a prime indicator of changing and increased demand for infrastructural projects.

The digital infrastructure is also being addressed. With a governmental benchmark of average speeds expected by 2020 only a fraction of that currently achieved by competing cities in Europe, Asia and America, a solution must be found for investing in conjunction with other projects, rather than considering such improvements to be either/or possibilities.

Therefore, by improving delivery, utilising innovative funding mechanisms and influencing fiscal reform, as well as balancing competing needs, the UK can indeed lay the ground for effective dual infrastructure investment to the benefit of all.