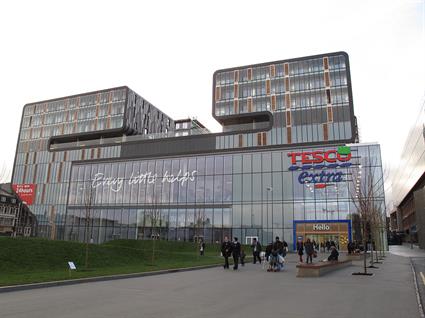 Come Autumn, architects around the UK all harbour a secret dread.

It’s the time that Building Design Magazine’s Carbuncle Cup will be presented to, ‘the ugliest building in the United Kingdom completed in the last 12 months.’

Essentially, it’s the architectural version of the Razzies.

The firm behind this year’s winner, Woolwich Central in London, told BBC News that the main aim had been to create a ‘cohesive piece of strong architecture that unlocked this vast space and establish a desirable place to live.’ The judges on the panel, on the other hand, referred to it as ‘lumpen’, ‘arrogant’ and ‘oppressive.’

A strange cluster of squat grey apartment blocks surrounding a 7,800sq m Tesco, Woolich Central was always going to be a strong contender for the cup.

Even the former head of planning on Greenwich council, Alex Grant, who allowed the project to go ahead in 2007, said: ‘It may not be a carbuncle but it is a flawed project and I regret my role as its midwife.’

Last year’s winners - Architectural firm Stephen George and Partners who created the ‘prison-like’ 465 Caledonian Road - student accommodation for University College London, will be eager to pass on the cup. Especially since students are charged a princely £730 a month to rent a space.

Rather gallingly, this is the firm's second win. Opal Court, located in Leicester achieved 'Carbuncle' status in 2007. Another ‘wretched hulk’ of a housing block, Stepehn George and co. definitely seem to have a knack for creating depressing student dives.

Another repeat offender is Chapman Taylor, responsible for 2011 winner MediaCityUK in Salford and 2006 winner Drake Circus Shopping Centre in Plymouth. The BBC’s move up to Salford was hardly greeted with enthusiasm by employees, and to make matters worse they were expected to work in the newly-named 'worst building in the UK.'

Chapman Taylor’s earlier win, Drake Circus Shopping Centre, was described as a ‘monocultural lump’ by The Times. The judges on the panel did not relent on the poor building, saying that the combination of bad planning and architecture produced ‘something truly awful.’

Howvever, there was a silver lining to this grey cloud of a shopping centre. One of their employees later won ‘Attendant of the Year’ at the National Loo Awards.

Some winners of the Carbuncle Cup have been understandably indignant. 2008 winner Radisson SAS Waterfront Hotel in Jersey, designed by by EPR Architects is a case in point.

Stuart Lowther, Managing Director of the architecture firm, said he was 'extremely disappointed' and claimed that the outcome of the building wasn’t their fault.

He said: 'It’s a scheme we inherited from another architect. The external envelope is not our design. We like to think that our own design projects that we start from the outset are considerably better.'

Being a contender for the cup, however, is not necessarily a bad thing. After being nominated for the award in 2009, One Park West turned the debacle into a huge PR stunt. Rather than get angry, they got hugging – and organised a human chain around their beloved building and called it ‘One Park Hug.’

In 2012, most were not entirely surprised to see the infamous ArcelorMittal Orbit, more commonly known as the 'strange red swirly thing at the Olympic Park', nominated.

The Times’ Richard Morrison described the piece as being ‘like an enormous wire-mesh fence that has got hopelessly snagged round the bell of a giant french horn.’

The Guardian ran a poll asking whether people they thought that designer Anish Kapoor’s Olympic Tower was indeed a grand design: 61.4% voted ‘No, it’s garbage.’

In the end, the ‘ship in a throttle’ Cutty Sark renovation floated away with the elusive prize.

Originally inspired by Prince Charles' lamenting of an extention to the National Gallery in 1984 ('a monstrous carbuncle on the face of a much-loved and elegant friend') the Carbuncle Cup carries the same sentiment into the appraisal of modern architecture, 22 years on.

And the term still strikes fear into the hearts of beleaguered British architects everywhere.

Rose Hill is an in-house journalist and writes for all titles in the Dynamis stable including BusinessesForSale.com, FranchiseSales.com and PropertySales.com as well as other industry publications.