The rise of the micro-apartment 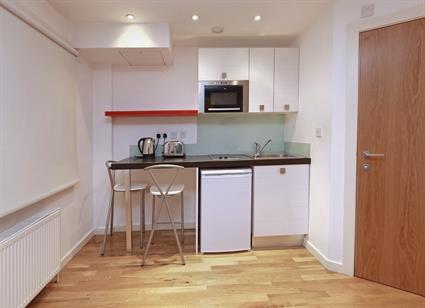 Across the globe, an increasing number of single city dwellers are adapting to life in 'micro apartments': small, economic living spaces, often around 15 x 15 feet, containing everything a young urbanite needs to live a metropolitan lifestyle.

This may seem ample when compared with the average UK prison cell (6 x 8 feet), but still pushes interior design to its limits with adaptations such as stow-away beds which become breakfast tables, overhead storage, and suites of Russian-doll style seating that stacks inside an ottoman.

Demographic changes, housing shortages, economic circumstances and lifestyle choices are all driving a need for urban accommodation for single professionals, students and the elderly which planners everywhere are struggling to fulfil.

US data for 2010 shows single-person households in New York running at 33%, with the rest of America at 26.7% up from just 17.6% back in 1970. Typically, such city-dwellers are adopting Asian economy practices, working later hours and living closer to work, thus cutting commuting time and costs. Others are just looking to live more efficiently, perhaps downsizing to secure a cheaper rent.

Avi Friedman, a professor and director of the Affordable Homes Research Group at McGill University’s School of Architecture, suggests the trend towards micro-occupancy indicates the 'Europeanisation' of North American housing: the UK average family home is 915 square feet, as against 2,480 square feet in the US – and the National Association of Home Builders predicts this will decrease to 2,152 square feet in 2015.

Local authorities everywhere are selectively shelving planning regulations to promote pilot micro-housing projects, in most cases reducing the minimum spacing in an effort to make such schemes more attractive to developers.

Seattle and Chicago favour micro-apartment projects, Boston and San Francisco have dropped minimum unit sizes as much as 20-25 per cent, and a Vancouver developer has completed a 'micro-loft' conversion turning a single-room type hotel into 30 units, each below 300 sq. ft.

Seattle, where the concept of no-frills living space is becoming well-established, is a city which is also experiencing the downside of changes in housing policy. Unrest has forced the City Council to consider a new proposal to impose restrictions on both the location and specification of the most controversial developments. As long-term Eastlake resident Jules James, discussing local opposition to micro-apartments, observes: 'I’ve never seen my neighbourhood so upset and unified'.

The City Council's Mike O'Brien, chairman of the land-use committee, is charged with the task of reconciling the ambitions of developers given the green light in this rapidly growing city, and the vociferous objections of neighbourhoods undergoing transformational development.

Meanwhile, pro-development advocates caution further legislation could curtail sorely needed housing initiatives, and Roger Valdez, director of Smart Growth Seattle, believes: 'You might see some get built to the new standards, but there will be fewer projects and the units will be more expensive (to rent)'.

Seattle’s problem is housing its growing number of single-person households. Figures for 2011, released by the Furman Center for Real Estate and Urban Policy at New York University, confirm singletons now represent above 40 per cent of all city householders.

Faced with such pressing demographic demand, O'Brien has proposed a 'design review' for new micro-apartments: those below 400 square feet should now be regarded as individual units, and an 180-square-foot minimum should be applied plus a 'project average' of 220 square feet throughout. O'Brien hopes 'folks (will) say this allows for more housing to be built in the city, but maintains the desirable fabric of our neighbourhoods.'

However, having obtained a judgement forcing a design review in a case where 49 micro-apartments replaced one single-family household, opponents are determined to resist wholesale cramped development as misguided and unhealthy.

Summing up objectors' fears about any future economic downturn, James said: 'This is our version of setting up a tent in the middle of the city, except a tent comes down when the boom is over.'

On the other side of the Atlantic, London is also experiencing a micro-accommodation boom.

Variously described as crash pads, pocket apartments, micro- or studio flats, these properties extol the virtue of small living spaces and are often marketed as affordable options for young professionals working in the capital. To achieve this, developers work hard to provide apartments priced below the all-important stamp duty threshold of £250,000.

As elsewhere, such developments are not without their critics, and The Royal Institute of British Architects has denounced the 'shameful shoebox homes' which, they say, are becoming a feature of city life in the UK.

Even so, the property consultant and estate agent, Savills sees a demand which parallels that of Singapore and Hong Kong, citing a recent sales frenzy in Bloomsbury where 'buyers queued to write out cheques' which would seem to substantiate this view.

Whilst the 24/7 convenience lifestyle is well-established in London, it remains to be seen whether the rest of the UK will be as keen to adopt the micro-apartment as the definitive 21st-century answer to present urban-housing shortages.